kINKY dOVE – Set to Take Off! 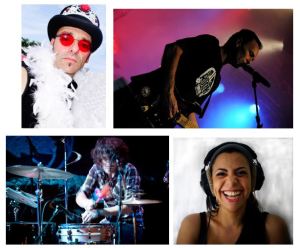 Made up of Scott Wade, Damian ‘Virgil’ Ward, Sulene Fleming and Adam Falkner. None of these are strangers to the spotlight, with Damian’s previous band V-Capri achieving recognisable success in his home city of Perth, with 6 top-10 singles, and a no. 77 on the UK charts, and Scott recently rubbing shoulders with Ed Milliband at a garden party in London. London-based singer and writer Sulene has toured all over the UK and Europe with bands such as The New Mastersounds and The Fantastics! Sulene has also featured on dance tracks released by Freestyle Records and the Ministry of Sound. Adam has been in One eskimO for many years, as well as recording with kINKY dOVE, and he is the drummer of choice for Dido, Pete Doherty and Amy Macdonald – to name a few.

The album, kINKY dOVE – Vol 1, is made up of a diverse collection of tracks that are simmering with synthesizers and soaring vocals from Sulene, with more sultry post-rock vocals contributed by Scott, and complimented by the catchy guitar riffs from Damian. Renowned producers Chris Kimsey and Phill Brown have played a part in the sound of kINKY dOVE.

Having already gigged at the Bedford venue in London, which has played host to many other now-famous acts, kINKY dOVE are looking to expand their audience, and it certainly won’t be difficult. In just a week they managed to gain over 500 plays on a dance remix version of their song ‘A Great Ride’ – which you can listen too here: https://soundcloud.com/thebenz/a-great-ride-kinky-dovemojo-filter-reflektor-remix

The song depicts a nice break-up, unlike most songs of tortured emotion, this song (a duet) speaks of a couple still expressing love for each other, without the sexual desire. It shows how break-ups don’t always have to be acid if the journey was ‘A Great Ride’.

For another dance remix of one of kINKY dOVE’s tracks, along the lines of trance, try this puppy on Youtube…..

Click here for the music video to their song ‘No Correlation’ – which was filmed when they performed at The Bedford: http://youtu.be/AP9jSJePqWg?list=UUe3dK0w2SfQ5iW64EZfEm2A

A classic track from the album is ‘Judgement Day. This song is about being judged for who we are and what we look like, which society starts doing to us all from the day we are born. It is also about the absurdity of drugs being criminalised, and how society does not have the guts to change the law, which, of all possible legal changes, would have the effect of taking so much crime out of our lives. The day that our politicians are brave enough to show proper leadership and courage on this matter will also be Judgement Day.

Other songs tackle issues like depression (On Your Own), unrequited love (Lust We Must) as well as ‘Fly Me Away’ – a dance track that dares to dream about everyone from everywhere coming together and dancing in unity.

The album was released on 15th October 2014, and is available to download now on all retailers!