UK born but now US based, John Graham’s new album is set to reach these shores showcasing slick, contemporary indie-rock with electronic touches and a heap of swagger. With influences including the Stone roses, Kasabian, The Cure, Depeche mode and more, it’s an album full of ideas which is primed to make an impact. The album is something of a departure for Graham, whose previous work under the name Quivver has seen him gaining countless plaudits producing house and techno music. 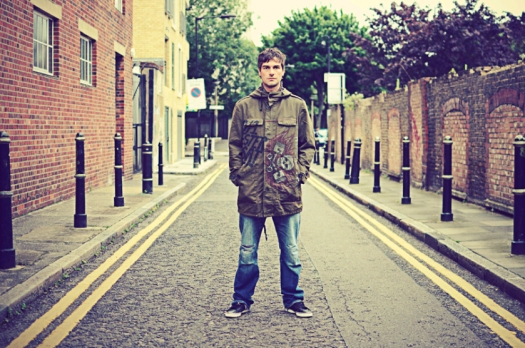 However, ‘Cold Sun’ and lead single ‘Roll the Dice’ prove that there are multiple strings to this particular bow,  by turning out tunes which are strongly based on the indie rock genre. These hook laden, energetic tracks are then laced with dynamic electronic ideas, ported over from his experience in the EDM genres, to give them extra flavour. It’s not common that indie, rock and electronic ideas are mixed so effectively, with the latter adding superb textures to the former, and it’s certainly one hell of a combination thanks to the subtlety of John Graham’s genre bending.

This combination is showcased by this superb video for the single  – not suitable for those with a fear of heights, it blends off kilter performance footage with a montage of adrenaline pumping, high risk stunts. It’s a truly compelling watch married to a fantastic musical groove.

The ‘Cold Sun’ album has been in the making for many years, being written in snatched time between full time work as a house and techno DJ and producer. It’s release is the culmination of an ambition John Graham has had for many years – to create a collection of songs that don’t fit neatly into a specific genre, and demonstrate just how versatile his writing can be.

His new music does a fantastic job of proving that thanks to a brazen and assured indie rock approach that drips with attitude. It’s a long way from the jungle and house specialist who started out in the 1990s and is well established in that environment. Over the years since, John Graham (as Quivver) has picked up myriad honours and career highs. The quality of his work can be vouched for by over 45,000 online followers, as well as record  deals with Virgin, Warner Brothers  &Hooj Choons who he has had record deals with in the past.

Single ‘Roll the Dice’ is out June 1st, to be followed on June 29th by the ‘Cold Sun’ album, both through Distinctive Records.

HEAD IN THE SOUNDCLOUDS